per • i • gee – The point in the orbit of an object nearest to the body being orbited.
Localized, irresistible, sensational. 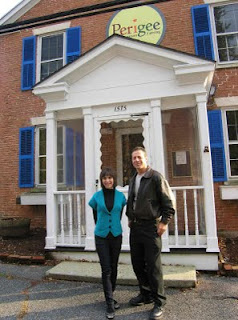 Perigee Restaurant, located at 1575 Pleasant Street, South Lee in the former home of the Sweet Basil Grille, will introduce itself as a new culinary destination in the region at the Taste of the Berkshires on Thursday, Nov. 5.

Owner Dawn LaRochelle, who has also owned and operated Apogee Catering since 2007, says the Taste of the Berkshires, which will be held at the Masonic Temple in Pittsfield from 5 p.m. to 8 p.m., is the perfect venue to announce the new restaurant’s opening as well as its unique culinary concept, which pairs locally sourced New England ingredients with cosmopolitan recipes.


“Our Berkshire Cuisine concept is one that is big, bold, and global on one hand, and homegrown, focused, and local on the other,” she says, adding that offering something for every taste was a major aspect of the menu’s development. “Berkshire Cuisine mirrors the distinctive personality of the Berkshires and its residents. We have dishes that are exotic, such as pan-seared diver scallops prepared with ginger cream and edamame succotash, and we also have ‘meat and potatoes’ and comfort food such as Balsamic Rib Eye with Red Bliss Mashed Potatoes, and game offerings, like grilled venison. Everything is pulled together by using local goods whenever possible and by using time-tested, New England-based cooking methods.”


In tandem with Perigee’s executive chef Michael Morelli, LaRochelle plans to serve two dishes at Taste of the Berkshires that exemplify the restaurant’s ‘Berkshire Cuisine’ concept: a cheese tortellini with smoked chicken, artichokes, sun-dried tomato parmesan cream sauce, and wild mushrooms from the Delftree Farm in Williamstown, and a New England pumpkin-ginger mousse in marbled Belgian chocolate cups. LaRochelle adds that the dishes also highlight Morelli’s expertise as both a head chef and a pastry and dessert chef.


Tickets to Taste of the Berkshires, sponsored by the Junior League of Berkshire County, are $40 per person in advance or $45 at the door, and can be purchased by calling 413.443.5151. Perigee will open its doors to the public on Monday, Nov. 9, and a Grand Opening Celebration benefiting the Pittsfield High School Culinary Arts Program will be held after the Thanksgiving holiday. For more information, visit Perigee’s Web site at perigee-restaurant.com.


Culinary artist Dawn LaRochelle launched Apogee catering in the Berkshires in 2007, and followed the success of her business by opening Perigee restaurant in 2009. With LaRochelle and Perigee’s executive chef Michael Morelli at the helm, both businesses are pioneering the Berkshire Cuisine concept – offering unexpected dishes prepared with local ingredients whenever possible – from a newly renovated, historic brick building in the Berkshires of Massachusetts.